I am Ashley's Discarded Eggs 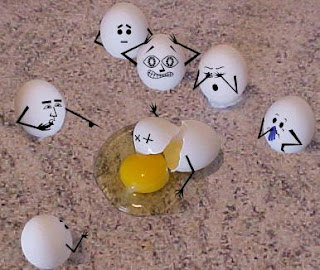 I woke up this morning with a random thought in my head...well, I do that just about every morning, but today was especially marked in that it was a completely unique thought to me.  Lately I've been having a lot of these, mostly regarding motherhood, injections, ovulating, my uterus, etc.  Not that I've never pondered these topics, mind you.  But lately these topics have taken on whole new meanings, and I find myself engrossed in unusual  mental territory oftentimes backed with quite a bit of what I find to be somewhat amusing imagery.  I have always had the ability to entertain myself, and will often chuckle to myself for no apparent reason.  That said, everyone may not have the same reaction I had to this mornings particular train of thought.

First a little bit of background knowledge...  A woman is born with all her eggs. Actually by 20 weeks old, way before actual birth, is when all eggs are fully formed and at their maximum count.  How many eggs?  Depending on which source you scour, which I am a scourer of knowledge, you may get a differing answer.  But usually the numbers are up there in the low millions, roughly around 2 million.  The count varies by individual, and like I said, different sources claim different counts...which just means science isn't perfect and we're still learning.  Regardless of the actual factual number, from the moment when all of our eggs are gathered in the proverbial basket, we start uncontrollably killing off our offspring.  (I know a few parents out there to whom this may sound like a pretty damned good idea since they are dealing with those massively horrible teenage years at the moment. Yay! Something to which I can look forward!).  By the time we are actually born, our egg count has dropped drastically to approximately 600,000...once again this varies by individual and the number of eggs one actually produces as a fetus.  By puberty we're down another 200,000.  Whoa! 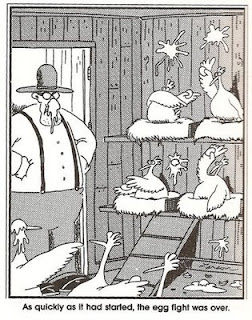 And after puberty?  Well every month we develop multiple eggs, although only one is normally released to travel along that wondrous path of creation with the higher-than-actually-getting-born-chance of entering into the world and becoming a little teenage shit!  Hahahaha!  Didn't see that coming did you?  Btw, both my brothers are dealing with newbie teenagers right now so that's where the teenage cracks are coming from.  I'm learning invaluable information regarding the horrors of this stage of parenting...the type I never realized whilst I was a teenager, of course, cause I was a freakin' angel! O:-) <-------notice my BIG halo! The other eggs developing every month?  Well they just shrivel up and die!  Which is exactly what will happen to the oh-so-special released egg if the elusive one sperm in a gajillion doesn't reach it's goal!

Okay, at this point some of you may be asking where this is leading and wondering why I find this amusing.  It's not the science behind the process that got me going this morning, it was the imagery that popped into my head while I regarded the science.  Has anyone here seen or read the Hunger Games?  Has anyone here been living under a rock for several months?  If you answered yes to question 2, then you probably answered no to question 1.  I seriously doubt anyone answered no to question 1, and if so I apologize as this may be a bit confusing.  But for those who answered yes...I woke up this morning with the imagery that what is left of my eggs, which is approaching an alarmingly smaller and smaller number every month, are "tributes" in a Hunger Game style reaping.  Each one is marked and has the potential for death every month, but only so many are chosen to compete in the arena.  At this point, the "chosen" ones go into the death-match arena and there can only be one survivor!  But in the end, if the sole survivor of the death match doesn't satisfy the masses (aka gajillion sperm), it is also exterminated!  Unfortunately unlike the book/movie, this reaping occurs monthly instead of yearly.  I know this isn't a perfect metaphor, but I'm sure you get where I'm coming from.

The other image I had this morning in regards to the same pondering, was one where all of my eggs were shoving this one poor little sacrificial egg towards the fallopian tubes. This image consisted of the poor little fella holding on to the edges of the tube entrance and pleading not to be pushed to certain death!   "Not me, Not yet!"  "Just one more month!" "You ought not done that, he's just a boy!" *All other eggs sneering and pushing like big-egged bullies* While this may not seem amusing, and I'd draw you a picture to relate the visual if I had any artistic talent besides dancing...(maybe an interpretive dance video?)...anyway, the thought just cracked me up! Like I said before, everyone may not get my inner humor!  I suppose the thought was driven my contemplation and realization that this was the first month in all my years in which I purposefully decided to doom this month's egg and that next month's egg had full potential of actual survival beyond my uterus.

On the flip side of my amusement, I also for the first time harbored a since of guilt about this natural monthly sacrifice.  Even though I've been doing this involuntarily since inside the womb, this month just felt different.  This month seemed more like a choice, whereas all the other months it was simply mother nature doing what she does.  And next month will also be a choice...the conscious choice to actually try and fertilize the "tribute" rather than kill it off in the death-match arena before it even stands a chance!  It is highly likely my self-amusing imagery was some sort of defense mechanism against the realization of all the possibilities lost throughout my life...of all the eggs discarded that were each, at 20 weeks, possibly a wonderful little bundle of cuddly, amazing, unique joy.  Then again, things happen the way they're supposed to in the end.  Next month, if everything goes as planned, one of those possible bundles of cuddly, amazing, unique joy will no longer be hanging on the precipice of extinction and actually be on it's way to becoming that teenage horror which I may at some crazed moment wish back into the arena because it has displeased the masses!

So there you go...my random thought of the day. :)

I found this particular site very informative for those who are interested. http://www.infertile.com/brochures/biological_clock04.htm  There is a lot of information out there, and a lot of it conflicting even between scientists and doctors.  The basics remain the same, so this was a good middle-of-the-road site.

Not sure what the rules are for using other people's images in blogs (I'm new at this), but must give credit on the second pic to the creative genius of Gary Larson's The Far Side®

Please drop me a vote at Top Baby Blogs by clicking the button below. Also, feel free to join me on my other Social Media sites by clicking on the additional buttons below that!