You Down With hCG?

Yeah you know me! 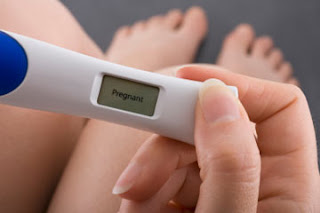 I know I've started all my recent blogs with videos.  Today I will refrain, however, since my choice in video may be a bit offensive (you should probably get this if you get the title's reference).  Anyway, today I thought I'd talk a little bit about hCG.  I am currently in my two week wait for my first ultrasound which is scheduled for August 16th, so I need to do something to pass the time!

First to catch everyone up....

Last time I was on here I had just found out I was officially pregnant via blood test and I had an hCG level of 242.7 at 15dpo (days past ovulation).  I went back in for my second blood test on August 2nd (two days after the first test) and my new hCG levels were at 638.  At this point, some of you may be wondering what all this hCG stuff means.  Basically, hCG is human chorionic gonadotropin, a hormone that is produced by the developing placenta once conception is achieved.  Once conception has occurred, the woman's body begins producing hCG and the amount of the hormone increases rapidly...usually doubling every 30-72 hours (this rate is for levels below 1200mIU...the doubling rate slows as levels increase).

Early home pregnancy tests (HPTs) measure hCG in a woman's urine and vary in sensitivity.  I used the First Response 6 Days Sooner test, and it is supposed to measure hCG levels as low as 12.5mIU (which is pretty low since most HPTs measure between 20-100mIU).  Since I got a positive five days before my missed period, that 12.5 seems about correct.

At 15dpo, when I had my first blood test measuring hCG levels, my levels were at 242.7 and two days later they had jumped to 638!  By this time I had already done a pile of research and reading up on hCG levels and knew these were excellent numbers even without my doctor telling me.  Here is a chart showing average hCG levels that seems to be pretty standard across multiple websites.  It shows the normal ranges of hCG at various weeks the past last menstrual period (LMP).  As you can see by looking at week 4, my hCG levels should have been between 5-426mIU.  Mine were at 242.7 and 638 that week.

As you can see from my numbers, I began within the normal range for the week but then my levels jumped and were then higher than the expected range.  When this occurs, the question of multiples always comes into play.  Of course, my numbers weren't hugely off the charts, so it does not mean I'm having more than one baby.  As per the experts, hCG is a very poor predictor of multiples since the levels have such a vast range.  A woman with low hCG numbers can have multiples just as easily as a woman with extremely high levels can have just a singleton birth.  The only real way to know is through an ultrasound.

Besides knowing if your hCG levels are within expected range for where you are in your pregnancy, the doubling rate is equally important.  One way doctors can tell if a woman's pregnancy has a chance of miscarrying is when her levels do not increase like they should.  If a woman's levels do not show signs of doubling properly, then this may be a sign that the pregnancy will not continue.

Remember from earlier that the typical doubling rate is every 30-72 hours with levels below 1200mIU.  I went in for two blood tests...the first to get the base or beta hCG level and the second to measure the rate of increase.  I found this great little hCG calculator tool on BabyMed.  http://www.babymed.com/tools/hcg-calculator.  Basically you enter in your levels, how many days past ovulation each test was done, and BAM!  It calculates your doubling rate.  My doubling rate was every 34.42 hours, so I was definitely happy about that!  Also, as per the chart below, I am above the maximum hCG level range for where I am in my pregnancy.  Once again let me remind you that this does not necessarily mean I have more than one baby!  There are forums all over the internet where women are agonizing over these numbers and questioning the possibility of twins or more.  I will know next Thursday (August 16th) how many little beans I'm toting around and no sooner! 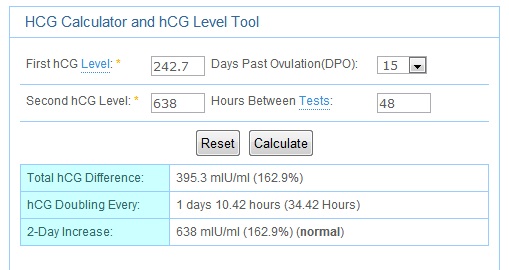 So there you have it, a bit of exciting information about hCG!!!  Are you thrilled?  Wait, there's more!  While I'm on the topic, there is another really cool website I enjoyed fooling around with...The BetaBase http://www.betabase.info/index.php.  This site allows you to add your hCG levels into the database and become a statistic!  In better terms, it uses the information input by thousands of women and then charts  hCG level averages of singleton, twin, and triplet births.  Here are the current charts: 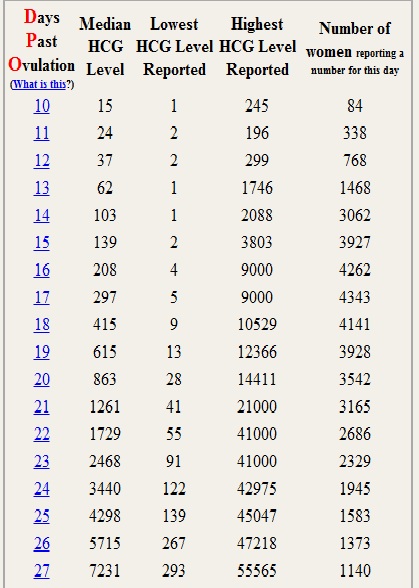 I'm well above average here...then again, I always have been! ;-) 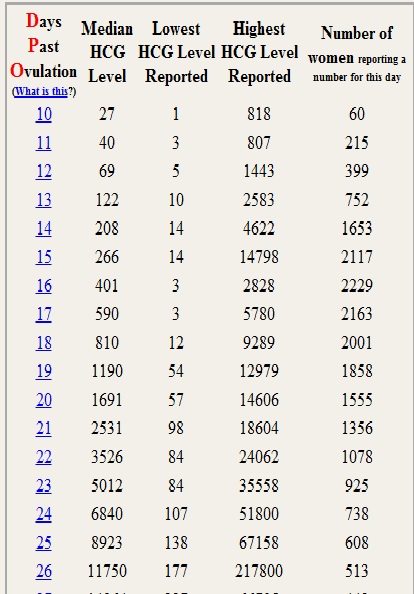 As you can see from these numbers, my levels fall more within the averages for twin pregnancies. 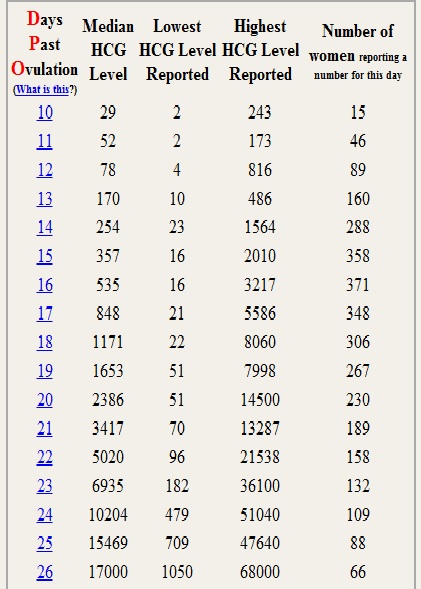 I'm not too far off triplet levels, ahhhhh!!!!

Once again, these charts can be found at the The BetaBase website.  When examining these charts, you get a really good idea of how vastly expansive hCG levels can be and see why it could be astoundingly difficult to actually predict how many buns you have in the oven.  But it is still fun to check out and pass some time pondering what it all means!!! The site also charts average hCG doubling times for singleton through triplet pregnancies.  It's just a very cool site, I highly recommend it!

On that note, I think I'll wrap things up for this time around as I think I've officially slacked off enough at work today.  What can I say?  Slow day at the office!  And although there is a ton of information out there about hCG and pregnancy, I hope some of what I provided helped entertain and enlighten at least one person!  Once again, thanks for reading.

Please drop me a vote at Top Baby Blogs by clicking the button below. Also, feel free to join me on my other Social Media sites by clicking on the additional buttons below that!