One of my favorite holidays has always been Halloween.  I love all the costumes, the air of childlike exuberance that exudes from people of all ages, the sweet treats, the scary movie marathons, and the stories and traditions of the pagan Samhain, for we are a bunch of pagan witches in my household.  So of all the holidays that Piper will be learning to celebrate in her first year, I must say I have been more excited for Halloween than all the others.  Right now she is still too young to understand the true history of Halloween, but she is not too young to enjoy dressing up and going trick or treating, even though momma gets all the candy, woohoo!

As there was a very limited selection of infant costume choices locally, I decided to dress her up as a monster this year.  We were going to go with a lamb costume, but the costume was sold out in her size.  We happened to run into another little girl not much bigger than Piper dressed in that lamb costume, and it was adorable, so we may have to plan ahead for that one next year.  Even though the monster costume was not initially our first choice, it ended up being a totally adorable awesome-blossom costume that fit Piper's personality perfectly.  It was a tad too large on her, at least the headpiece was, but a few giant safety pins took care of that problem.  Once she was in it and the headpiece pinned into place, she made the cutest damn little munchkin monster in the entire world!

Before I get too much more into the trick or treating portion of this tale, let me backtrack my train of thought and start with events earlier in the day...

Piper woke up Halloween morning seemingly feeling much better than the days before.  She had been battling her first cold, and all that really remained was a very runny nose, thank goodness.  For her day at my office, I decided she should wear her little pumpkin outfit, the one she had first worn to the pumpkin patch.  I adore this outfit and am so happy her Nana bought it for her.  She was a smiles and giggles and our work day started off swimmingly.  However, right after her early afternoon nap, she became the grumpypuss from hell!  I'm still not completely sure where her grumps came from, but I think it had to do with the fact her little nose was tender from all the snot and Mama was forced to clean it out for her.  I did my best to be gentle, but I totally pissed her off regardless!

Once I was done with her nose, my older youngest brother came by the office and Piper all of a sudden decided to become absolutely terrified of him.  She howled and cried big, dripping tears.  He had recently shaved off his beard, so I'm thinking the change in face threw her for a loop.  Eventually she calmed down and warmed back up to him, and by the time we went trick or treating later she was all smiles and giggles with him.  Who knows what goes through a child's head at moments when they act all weird like that, right?

After my brother left, I thought maybe she'd cheer back up, but no such luck.  She cried when I changed her diaper, threw a fit when I tried to feed her lunch.  I ended up having to throw all her food away that I had put on her plate.  She has never not made a happy plate!  I even tried to give her an extra boob, and she didn't want that either.  I'm suspecting that her upper, middle incisors are trying to come on in, as she's been biting my nips and chewing on everything, and the pain of teething yet again had gotten the best of her.  I was seriously worried that she would be in a grumps for trick-or-treating and not want to get dressed up and go have any fun.  I am so very happy I worried for no reason. 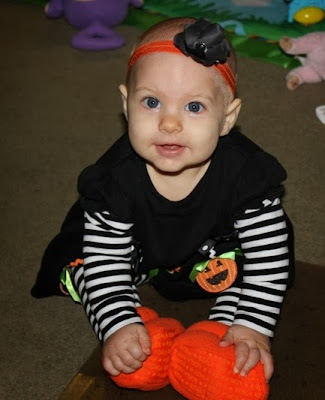 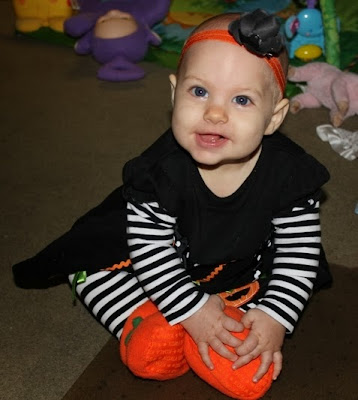 Once we left work at 4:30, she took a brief nap on the way to pick up my nieces.  Once at their house, she laughed and played with them, finally ate some solids, and didn't complain a single moment while we stuffed and pinned her into her costume.  She did briefly freak out and cry again when her cousin came out from putting on her costume and had a wig and a mask that covered half her face on, but once we let her feel the mask and touch the hair, subsequently realizing it was just a costume, she calmed right back down and didn't get upset another time throughout the night.

We had an absolutely blast roaming the streets all dolled up.  In our hoard was Piper the monster, a gypsy, a broken down doll, a witch, and a southern belle.  The rest of us were just along for the fun and decided to save money and not go in costume this year.  Next year I may decide to dress up as I think it would be more fun for Piper when I'm walking her to the doors.


Since Piper is not quite seven months, this year I decked out her stroller with a bunch of glow sticks so it would look cool and people/cars could see her.  I hung her candy bucket on the front with some glow bracelets, genius idea of my brothers, as I was holding it for her at first.  She rolled up to the front doors for about half the night, then she got tired and wanted to be picked up. My nephew then pushed the stroller around for me while I carried Piper.  My oldest niece was an angle and helped carry Piper's candy bucket between houses.  Piper is a squirmy handful, especially when there are kids in costumes to observe, so I literally needed both hands to hold onto her properly.  She enjoys looking at the world upside down, so continually tried to fling herself backwards in my arms! While she did enjoy riding in her stroller with one leg kicked up whilst chilling, she really enjoyed being carried!  She pretty much had saucer eyes the entire night.

Once we were back at my brother's house, all the kids broke into their candy for the traditional trade session.  Piper was treated to a sucker by my oldest niece, and tried crawly-sneaking into other people's candy buckets.

We were pretty exhausted and she hadn't yet had dinner and it was almost 9, so we took some last minute pics, my brother and his wife hooked me up with some to-go dinner, and Piper and I headed home.  She semi-cried the entire way, exhausted from her long day.  Upon arriving home, I gave her a quick boob before settling her in for her solids.  She ate fine, and then caught her second wind!


While eating, she started saying Papa for the first time, yay!  After eating, she became a sugared out spaz! Although she only had one sucker, it seemed like she'd drunk an entire Rock Star energy drink!  I went to wash my face and get ready for bed and handed her over to Nana and Papa, who then took her to play in their bed.  By the time I got done, she was climbing all over their pillows, leaping in the air, wrestling with my mom's Snoogle, and squealing and laughing with complete abandonment!  She's a very happy baby, but I don't think she has ever been more happy than that 5 or 10 minutes Halloween night when she just seemed to lose it to the giggle monster.  I love hearing that squeal of laughter, she had us all in stitches, that's for sure.

Eventually my little monster succumbed to the sleep fairy.  She began to rub her eyes and make her spittle noises which indicate it's time for a boob.  I took her to my room, cuddled up with her, and let her nurse until she let go naturally, but kept suckling with her tiny, perfect mouth in the air.  I slyly put her hoppy (pacifier) in her mouth, flipped her onto her tummy and wrapped her arm around pig, and then covered her gently with the blankets.  She stayed that way until I had to wake her up this morning.  Yes, she had had a very good Halloween.  She might not remember it when she gets older, but I will cherish every moment, even the fussy ones.  Best Halloween ever!

Hope you've once again enjoyed this entry.  Please take a moment and gives us a Halloween treat by voting for us over at Top Mommy Blogs and Top Baby Blogs via the banners/buttons below.  Then come check out our other social sites.  If nothing else, join us on Facebook and catch all the Piper action on a daily basis! Take care and thanks for stopping by!