Last weekend, yes it has taken me this long to get to it, I took Piper to the zoo for the very first time.  While I know she is still a bit young to truly appreciate the entire zoo experience, as most animals totally do not grab her attention unless they are quite active, it was a beautiful day with perfect weather that begged for an outdoor adventurous activity.  So we packed up her nice stroller and her Nana, and set off to enjoy a pleasant day wandering around and exploring the zoo grounds.

Let me start by saying that our local zoo is not the greatest zoo on the planet, but it's starting to improve a bit, although it still has a long way to go.  Disappointingly, not a whole lot of the few animals were out and about that day, and if they were they weren't doing much or couldn't be seen.  I was especially disappointed that the giraffes were too far away for her to see due to some work being done in their yard, and there were no elephants out, either.  We had an elephant die a couple weekends ago, so that might have had something to do with no elephants not being in their yard, although I do believe we have two, so not sure why the other one was put away.  We also arrived after 1pm, so many animals were in that mid-day lazy stage, such as all the dang big cats.  We didn't get to see any lions, or tigers, or bears...oh my!  Well, we did spot the two cheetahs lazing in the grass way in the back part of their enclosure and partially hidden by a wall, but does that really count?  Regardless of it not being the most exciting of animal adventures, there were some out and about that Piper got to enjoy.

I am a huge primate fan, having worked with the great apes at the zoo for a couple of years in an enrichment program through our university system and as part of my undergrad degree plan, so naturally I wanted her to see the apes in action first.  Plus, I knew we had a new baby gorilla that Piper would enjoy watching. Wait, let me back up, the apes were not the first thing we did, and what we did first is unique and cool to our zoo.

Our zoo is home to the Arkansas Carousel, an antique over-the-jump carousel that is the only one of it's kind in full working order in the entire world.  So although our zoo is not the best, it does have bragging rights when it comes to the carousel.  It sits right inside the zoo's main entrance, and it was our first stop of the day. Since her Nana was there to help, we decided to go ahead and let her ride on one of the horses rather than sit on one of the carousel benches.  I let her sit with her Nana so I could take some pictures of her first carousel ride, that and they started the damned thing before we had gotten settled!  At first Piper was a bit wary, then she threw up in her Nana's arms, and then she finally began to enjoy it after that.  I am presuming the up and down and round and round motion made her a bit motion sick, but it may have just been coincidental timing.  It was quite funny regardless of the slight mess, and I'm glad she ended up enjoying the carousel once she got over her green moment.

We were very lucky that the baby gorilla was out and about with his mother.  Piper didn't pay a whole lot of attention to any of the other apes, as they were just kind of chilling, but the baby gorilla seemed to fascinate her, as if she knew it was very much like herself.  It was almost like she got the connection between gorilla mother and child and how they had the same relationship as her and myself.  We tried to get her to admire the chimps, but they weren't doing much, and the orangutan was out of her eyesight.  I could personally watch the apes all day, so hopefully when she is a bit older my fascination and knowledge of them will rub off on her...oh there is so much I can teach her since I've taught primatology before!  She really is in for a treat later on in life!

Besides the apes, there were really only three other animals that really made her take notice of them, the penguins, the birds in the walk-through atrium, and the naked mole rats.

The naked mole rats are pretty new to the zoo and are housed inside see-through tunnels for viewing.  She seemed to love watching them as they scurried about, darting from one tunnel to another.  I think she could have spent quite a lot of time just sitting there in her stroller, chillaxing and checking them out, but it's not a large area for viewing and we had to let other people see, too.  I am definitely a courteous zoo-goer, as I hate people who block everyone else from seeing the animals in action because they are selfishly unaware that other people exist on the planet.  I hope to instill this courtesy in Piper as she grows up, as a lot of children's parents don't seem to mind if their kids hog the viewing areas, probably because they are the exact same way, sheesh!

The bird atrium, which is indoors but open-air, got her attention the second time we passed through, as there were several ducks relatively close for viewing as they bathed in the water.  There were also a couple of Roseate Spoonbills that were walking about that we could almost touch they were so tame and unafraid.  I actually got slapped by one of their wings, so that was pretty cool.  She giggled at them as they passed right beside her on their way to one of the bathing ponds.  I bet if she'd tried she might have gotten to actually touch one.   I also imagine if she'd been walking there would have been a chase going down!

Overall, the penguins were by far the most captivating animals to Piper.  We happened to wander upon them during feeding time, which was just a lucky perk, so she was able to watch them through one of the underwater glass viewing areas while they ate the fishes being thrown to them.  She delighted in their swimming about and coming right up to her through the glass.  While she was quite enthralled with them, all the people around were enthralled with her.  She was doing her crinkle-nosed growl of excitement, of course, and this got everyone's attention as she sat on my knee. 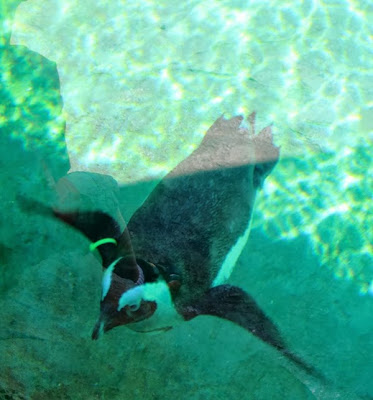 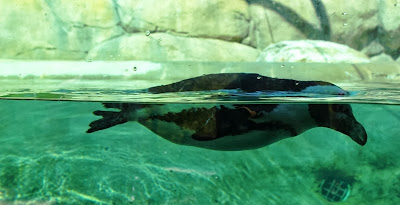 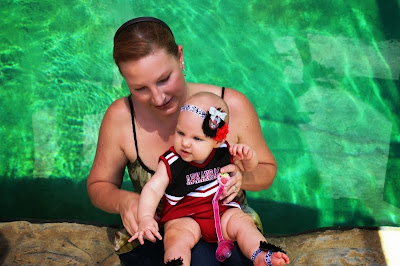 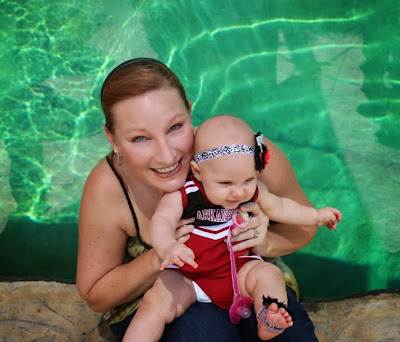 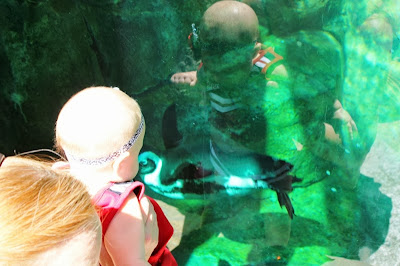 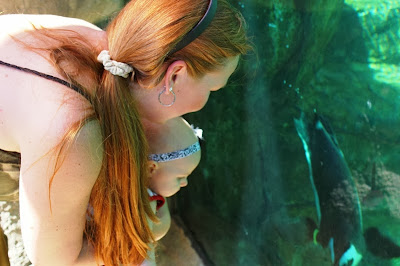 You know, now that I think about it, it wasn't the penguins Piper loved the most.  The most captivating animals she saw were actually all the people.  She had never been around crowds before, especially crowds with other people her size mixed in.  She did a whole lot of people watching, and was especially taken by the other children.  As a matter of fact, she met an older man, a 9-month old named River.  We ran into him twice and both times he and Piper did a bit of flirting from their strollers.  It was River's dad who first sought us out, introducing Piper to his son, and I was very surprised upon the second encounter that River's family remembered Piper's name and made it a point to engage River and Piper once again.

Funny enough, a lot of folks made it a point to glance and comment on Piper.  She got oh so many compliments on both her beauty and her snazzy Razorback cheerleading outfit, for it was game day.  She had matching Razorback shoes and headband made by a lady my mom found on Facebook.  You can check out her wares at Mama Knowz Bowz.  Needless to say, I was a very proud mama that Piper seemed to grab so much attention.  I know she's a precious little adorable doll, but it's nice that other people seem to think the same.  She's a natural at getting all eyes on her, a trait that tends to run in our family for some odd reason...oh wait, that's right, we're all a bunch of fun-loving, boisterous hams!

Upon leaving the zoo, we exited through the gift shop because Piper had to have a reminder of her first trip to the zoo.  We were going to get her a penguin, since she so enjoyed them, but instead a pink and purple fox with glittery eyes caught her attention and that was it for the plain old black and white penguin!  She is such a girly-girl!  Didn't hurt that the fox was oh so fluffy and soft, too.

In the end, we had a fantastic time on our outing.  Although the animals were not the most exciting that day, the weather was delightful, the people were fascinating, and we all enjoyed our day out exploring a part of the world completely new to Piper.  I'm definitely going to be purchasing a family zoo membership again, that way we can continue to go for free the rest of the year.  I know each visit will offer a completely different experience, and Piper will learn something new with each subsequent trip.  Even if all the animals don't come out to greet us every time, just walking around the zoo is an adventure in and of itself.  Plus, the carousel is there and a definite must ride every visit!  Maybe next time the train will be up and running, too. 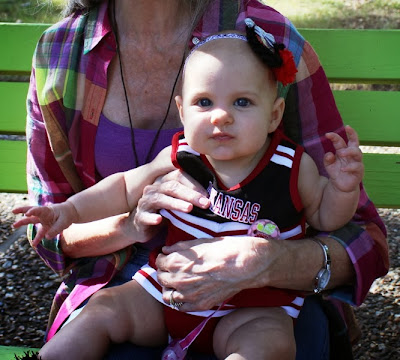 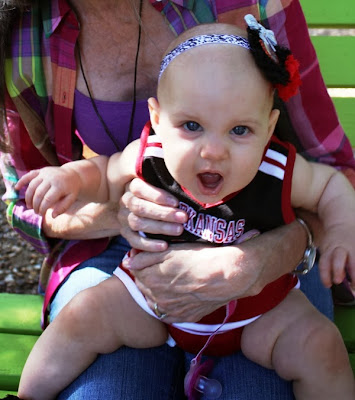 I hope you all have enjoyed this little tale of our visit with the animals.  I wish I had gotten to take more pictures, but I was too involved enjoying watching Piper take it all in and didn't want to ruin that experience for me by viewing it all through a camera lens.  There will be plenty more opportunities for pictures at the zoo in the years to come.  One of these days I will have to go alone, when she gets a bit older, just so I can spend the day concentrating on animal pics with the new fancy camera of mine.  It's definitely too difficult to do both right now, nor do I want to take away from our experience together by concentrating too much on my camera.  But who am I kidding, I love the zoo and cannot fathom leaving Piper at home whenever I visit...at least not until she's school age and I can sneak away during work or something.


If you enjoyed this post and the blog, please do me a nice favor and take just a second to vote for me both at Top Baby Blogs and now on Top Mommy Blogs, too!  Just click the buttons below, it's as simple as that.

Also, please join me on  my other social sites by following the provided links, especially the Facebook link, as fun things are always happening over there!  As always, thanks for stopping by and do come back again!