Wow, what am amazing Thanksgiving we had this year!  To premise all of this, I come from a very close family, with all sorts of quirkiness spewing forth from our genetics, and we are always a fun group to be around.  But I tell you, we topped ourselves this season, and that my friends is an astounding feat! I don't think I have laughed so hard or felt so loved in all my years.  Through all of the changes in relationships and all the ups, downs, and adjustments we have experienced over that past few years, everything seems like it has finally settled down and fallen into place for our little clan.  While of course not all things are always perfect, and there are people once in our lives that have vanished to the winds unexpectedly, we have as a singular group, rebuilt our stronghold into the very rock that it has been since we came into this world. Nothing feels more right and true than to have our strength as a family back to where it once was. 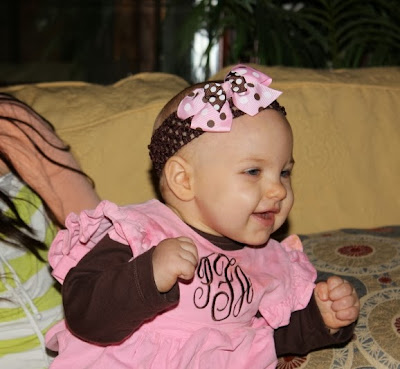 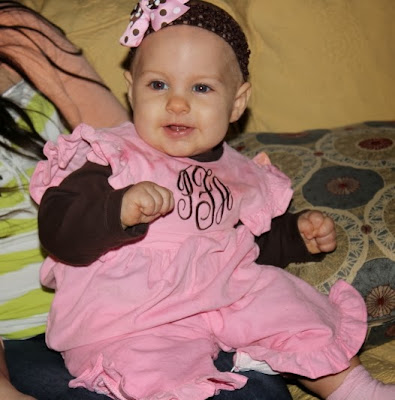 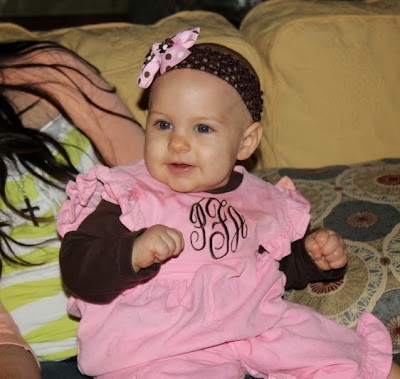 Unfortunately for all you loyal readers, I'm not much of a holiday picture taker.  I get so distracted by all the commotion and family camaraderie that whipping out my camera just never comes to my mind until after everyone has left for the evening.  Of course, during Thanksgiving, I'm also one of the two main chefs, so I'm swamped in the kitchen to boot.  I did manage to take a few quick snaps of Piper and my niece Larkin, which I will post, but if I didn't tell you so, you wouldn't have a clue they were holiday related.  You will notice that Piper is not in a "Thanksgiving" outfit, per se.  However, under her cute pink overalls, her brown onesie does say Gobble, Gobble. Gobble on it...you just can't see it!  But it was there, so I count it regardless.

Besides these few pics, my day was solidly filled with cooking, drinking champagne, eating my wares, and laughing so hard I almost wet myself a few times.  I'm not trying to be conceited, but out little clan is damn funny.  Wittiness runs in the family, we have a vein of sarcasm so deep it makes the Grand Canyon look like a crack in the sidewalk, and our brand of humor is not meant for the faint of heart or easily offended.  We crack jokes that may be offensive at times, but always in good humor, and we do it without shame.  We are also a clan of performers, so this may have something to do with out ability to go hours improving our way through comedy routines, song and dance numbers, and other bizarrely crazy antics.  Here's a good round-up of some occurrences this time around... 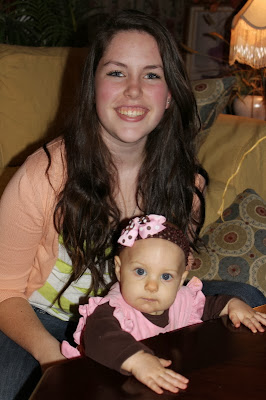 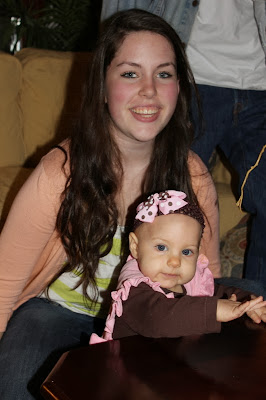 Three of my nieces performed a two-act play/song and dance routine.  The first act consisted of giving everyone new funny names initiating us all into the Great Mustachios (I have no idea what that means), whilst handing out toothpicks for some strangely odd reason we could not begin to fathom.  I'll be totally honest here, this portion of the festivities was more on the WTF side, but I think the intended humor was lost somewhere in translation.  The rest of us booed the bad performance uproariously, for we do not praise a job poorly done, we bash it with insultive (my word, I like it) humor, and that's what makes it all fantastic no matter how poorly executed the idea and performance.  Half the fun is being poo-pooed for sucking at life, hahahahaha! 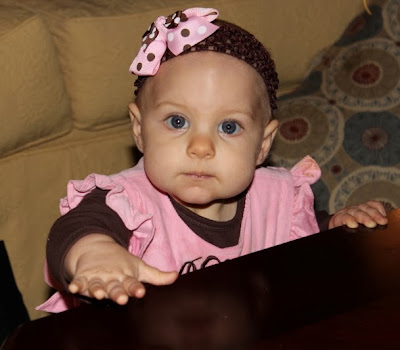 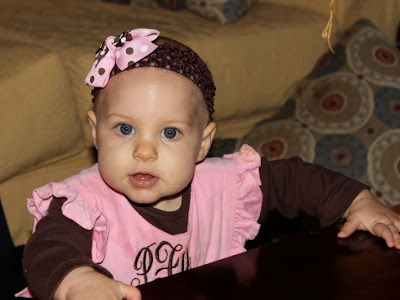 These same three nieces went back to the drawing board and came out with a second act far better than the first.  There were made-up Thanksgiving songs about turkeys, with movements and hand actions to boot. There were dance numbers, one of which consisted of a tango with Sake the giant sock monkey.  There was at one point a judging for the best performance, which went to the next to youngest of the clan besides Piper, and we rewarded her with the toothpicks received by us during the first act.  It seemed it was only fair to have the award be as poorly designed as the original scripted event.  Who knows why we do what we do, we all fly off the cuff and it all turns out funny in the you-just-had-to-be-there sort of way.  Believe me, we all got tickled with ourselves.  Of course, booze was flowing and this does help sometimes. ;)

My oldest niece, the oldest "child" of the clan, although she is more a young woman now than anything else, managed to perform a raucous improvisational routine with my brother Sean for quite a long stretch of the evening...it all started when he managed to put his toothpick into his mustache for safe keeping.  I cannot fully explain what that started, but it began what will be known as one of the greatest family moments of all time, at least in my book.  Their little bit began with the receiving of the toothpicks, which led to mimicking extreme Southern drawls, and then it just kept going.  I wish I could properly explain the back and forth of these two with their exaggerated redneckisms, but it had a lot of Slingblade mixed with Rango mixed with backwoods slurs and old-timey sayings from the days of old, but with a sarcastic wit, a tongue-in-cheek attitude, and some of the best down-home lingo one could possibly imagine.  I knew my niece was funny and smart, but that girl had it going on!  She was whipping out the quips like she was an old member of Monty Python, trailer park style! 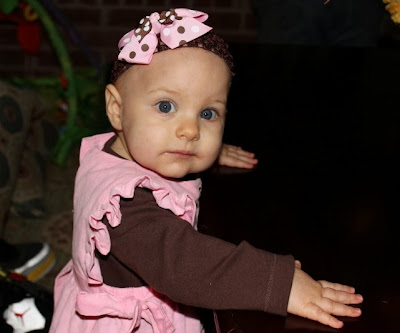 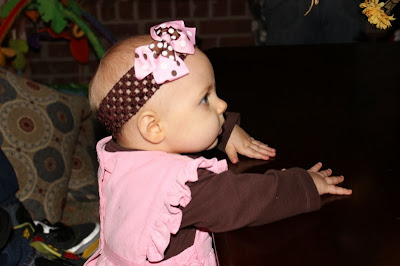 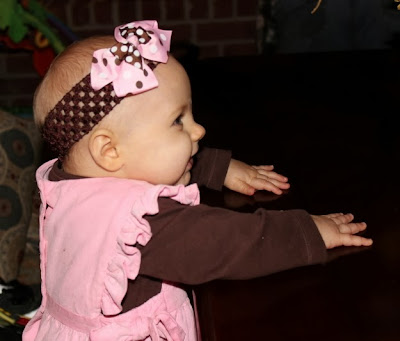 Besides all the fun and games, dinner was fantastic!  On the menu this year was the usual turkey but this year I injected it with butter while my mom rubbed rosemary under the skin.  We also had my infamous stuffed mushrooms, my great grandmother's dressing, green bean bundles, mini macaroni bites, artichoke and roasted red pepper pastry puffs, cranberry sauce, carrots and rutabagas, cheese grits, crescent rolls, cream cheese cherry pie, mini apple and cranberry pies, pumpkin pie, and last but not least, champagne, beer, wine, and whiskey.  I feel like I may be forgetting something, especially since we have such a massive spread every year, but if so, oh well. The mini macaroni bites, pastry puffs, and mini pies were all new this year. I decided to add some finger foods that would fit nicely on an overfilled plate, so that was my inspiration for those. All but the pies were homemade recipes, and I was amazed at how well they all turned out. I will admit that a lot of cursing went down during the mini pie making. I will openly admit I am not much of a from-scratch baker. I really suck at rolling out dough, and I honestly don't know how the bakers of the world accomplish such amazing works of art. My pies looked like crap, I dropped a lot of f-bombs during the process, but in the end they were ugly but uber delicious.  As a matter of fact, they were the new favorite item, which means I will be forced to recreate them every Thanksgiving from here on out, yay!  Yes, you can read that as extreme sarcasm!

Since I've been holding this particular post for a couple of weeks now, and for personal reasons that I have decided to keep to myself, I will wrap it up so I can finally push the "publish" button. Regardless of the reasons I had for postponing the post, I think it's important for me to put into perspective how amazing the actual day of Thanksgiving was this year.  Regardless of some things that happened afterwards involving members semi-new to our clan, the day itself was spectacular and one I will always remember for how remarkably special it was from beginning to end.  I couldn't have dreamed of a better first Thanksgiving for Piper, unless that is if she could have had more than just jarred baby food and a few bites of pie innards, but it was the perfect day and that's what matters most.  My family is close and we love to celebrate, so having a particular holiday stand out amongst the many great get togethers, that's something to be thankful for.  I'm still amazed that it was just last year at this time that my belly was big and round from Piper.  Hard to believe she's going to be eight months tomorrow.  I hope all of her holidays with the family in the future end up being just as special, fun, and full of love.  I know she won't remember this one, and there are hardly any pictures (although pictures could never relate the amazingly funny day it was), but at least we'll have this post and our family's memories to go with it.

I hope everyone's Thanksgiving was as delightful as ours.  For those who do not celebrate the holiday, I hope it was a nice Thursday, at least.  I'm very much looking forward to the rest of the holiday season, and I guarantee you there will be plenty of pictures of Yule (Christmas for you non-pagans) and New Year's! I so love this time of year...the cold weather, the holidays, family time together, great food, spirits (the liquid kind), traditions, and all of the other things that make the wintry months pass by while awaiting the Spring. And now I get to share all of these things with Piper.  It's so totally awesome to have her here and experiencing all of this through the eyes of a newbie.  She lights up with delight at all the sounds, smells, noise, decorations, and family chaos.  She gives me a lot to be thankful for every single day, and I do thank my lucky stars every single day for her, that is no lie.  Life is fantastic, that is for certain!


Guess what?  That's right, I want you to go vote for us over at Top Mommy Blogs and Top Baby Blogs. And then I want you to set a little alarm in your phone that reminds you to go vote for us every single day! You can even vote once from your phone and once from your computer.  And if you have multiple computers, well then go vote some more!  I want all the votes!  You guys are awesome!

Email ThisBlogThis!Share to TwitterShare to FacebookShare to Pinterest
Labels: Baby's first Thanksgiving, crazy holiday fun, Hyper Piper, I come from a family of performers, my family is nuts, Pagan holiday traditions, you might be a redneck if